For many years the Hotel La Mamounia in Marrakesh has been another one of those legendary places I longed to see some day if I ever made it to Morocco.  I had read celebrity lists of their favorite hotel in the World and La Mamounia was the one that was mentioned most.  In photos I had seen rose petal strewn fountains, something I borrowed and often do in my own garden whenever I have a special event.  So when I arrived in Marrakesh, I looked at their website and sent an email saying I was working on a book on Moroccan gardens and with an accompanying lecture, and would it be possible to tour the gardens.  I received in response a series of official press releases, but not an invitation to come in.  I went by the front gate and was told the hotel was closed to the public for special events until after the New Year.   I sent another email and got a standard reply that tours were available  in the morning and afternoon on weekdays by appointment, but photos were not allowed.  “Send us a copy of your magazine when it reaches publication”.  Hmmm, a magazine article with no photos?

La Mamounia had been closed for 3 years for a complete renovation  and had reopened the end of September of 2010.  It originally had 50 rooms and was enlarged to 100 in 1946.  There were three subsequent renovations over the years, but the last one more than doubled the number of rooms to 210.  The website is beautiful, with music and brief slide shows of the various types of accommodation at www.mamounia.com .

The hotel was built in 1922 on the site of a garden given to Prince Moulay Mamoun by his father, King Sidi Mohammed Ben Abdellah as a customary wedding gift.  Built in a blend of Moroccan and Art deco styles, the hotel became legendary, hosting a long list of celebrities and political power houses.  Winston Churchill, a frequent guest called it ‘The most lovely spot in the World’.  The Rolling Stones, Elton John, and Led Zeppelin came here.  Salma Hyack and Gweneth Paltrow attended the latest reopening ceremonies.  Whoop dee do.  I am not a celebrity beyond the pebble mosaic circuit, but I showed up at the gate on January 3rd at 4:30 in the afternoon for my tour appointment.  I was told at the gate that tours were only conducted in the mornings.  I insisted that I had made a reservation and was told to arrive at 4:30.  I was wearing my best clothes and even shaved for this. So they let me in.  I immediately started taking photos of the beautiful new entry gardens now that I was unsupervised, though I felt like I was breaking the rules, but once inside I was treated quite well.

I went to the reception desk and told a desk clerk I was here for a tour of the gardens.  A man who looked like a member of the secret service was summoned and asked me to have a seat on plush sofas surrounding a low table with a huge brass tray with a mandala of Medjool dates arranged on it.  I love dates and was tempted to start chowing them down but I restrained myself to feign dignity in case my host suddenly arrived.  A young man in a fine dark brown suit approached me and told me he would take  me on a tour of the hotel grounds.  We walked through the lobby as very ordinary guests wandered around in shorts and T shirts, and I no longer felt at all out of place.  As long as you pay your room bill you can do as you please without pretension apparently.  Passing the Churchill Bar, which hadn’t opened for the evening, we entered a fabulous covered swimming pool pavilion as elegant as a pool can get.  The pool is surrounded by whitewashed Moroccan arches with tile zellij columns.  Centered on the far end of the pool is a keyhole arch framing a white lounge bed with pillows.  This is my kind of embellishment for sure.  I asked if I could take photos and the young man said yes, as long as I didn’t photograph guests.  I wasn’t the least bit interested in having guests in my photos unless it was Mick Jagger or Robert Plant, so that wasn’t a problem.  We walked from there through a classic courtyard with central fountain and out on to a terrace where guests were relaxing in the late afternoon. 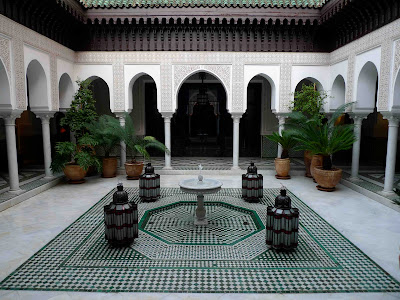 The terrace is adjacent  to large Moroccan gardens with green lawns and rows of orange trees covered in fruit.  I can only imagine the sublime aroma when the trees are in bloom.  On one side are three luxury Riads, 3 bedroom apartments, each with a private swimming pool.  There is a VIP entrance here for famed guests that don’t want to be seen entering through the lobby.  Straight axial paths took us out and around an exercise  pavilion with the traditional green glazed tile hip roofs, and a very elegant place to play ping pong.  We then approached a restaurant terrace with a series of very beautiful courtyards, one with a long central pool lined with candle lanterns ending at a tile zellij wall fountain.  The proportions of the courtyards was in line with the best of Andalusian design, with tastefully restrained plain whitewashed surfaces rather than carved stucco reliefs.  The adjacent courtyard was empty of furnishings as if it were only for the contemplation of its simple square blue tiled pool and white marble fountain.  I was loving every second as we were the only people in this area.  Everything was perfectly brand new but exquisitely crafted and spotlessly clean, like seeing a palace in it’s heyday rather than worn down by the ages like so many historic places I had visited on this trip.


We returned to the main hotel building and entered a room that used to be the dining room but had been refurbished as a grand hall next to a bar.  The ceiling was a large decorative panel painted by the French artist Jacques Majorelle.  This was the end of the tour, and I was quite happy.  I milled around the staggered stepped tinted cement panels of the entry gardens again for some time before I left through the front gate, stopping to visit with the men who originally let me pass.  They were quite friendly by this point and I shared photos of my work in a copy of the book I published last year.  I’ll be publishing another book when I get home including images I took at the hotel during this visit.  Ironically, I didn’t notice any rose petals in any of the pools.  Oh well, I’m sure they still do it, just not today.

Posted by Jeffreygardens at 6:16 PM