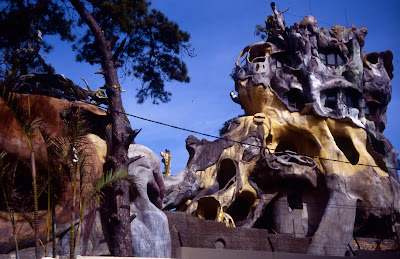 In the winter of 1998-99 I spent two months of a four month trip to Asia exploring the country of Vietnam, from the Chinese border in the north to the bustling Mekong Delta.  Vietnam is a fascinating and intense country with over 90 million inhabitants.  Reminders of what the Vietnamese call the 'American War' are everywhere, from vast cemeteries to the scrubland that was created by repeated sprayings of the Monsanto manufactured defoliant Agent Orange. To this day there are many thousands of horrific third generation birth defects caused by the excessive exposure to Agent Orange.  The people are tough, hardworking, and resilient as a result of years of suffering and survival under the worst possible conditions imaginable.  Why this war was waged by the United States is very difficult to understand when treading on Vietnamese soil.  Over 3,000.000 Vietnamese were killed during the war.

There are few places that weren't destroyed by a massive bombing campaign during the war.  Some cities were obliterated entirely by what is called carpet bombing.  Those places that were spared give a glimpse of how beautiful the country must have been.

I entered the country with my friend Sally from Laos at the remote and seldom used mountain border crossing at Cao Treo.  We traveled north through the gorgeous limestone karst landscapes of Nihn Bihn to Hanoi, and then up in to the Tonkinese Alps to Sapa and the surrounding area.  This is a region rich in hill tribe culture, and a frequent destination for plant explorer and friend Dan Hinkley, who has made 10.000 ft. Mt. Fansipan a focus for gathering high altitude subtropical plants.

From there we returned to Hanoi and made a tour of picturesque Halong Bay.  Then we headed south to the imperial city of Hue, with its amazing cosmic garden tombs of the Vietnamese emperors.  I hope to write about these tombs at some point in the future.

Then we made our way to Danang and the town of Hoi An, an architectural gem since it wasn't destroyed in the war.  This is also a culinary center for delicious Vietnamese/French cuisine.  Further south on the coast is the resort city of Nha Trang.  We visited the hometown of my my mechanic Tuan in Phan Thiet.  He hadn't seen his family since fleeing the country after the war.  He has since made two trips after I  checked things out for him.  From there we visited Saigon, or Ho Chi Minh City.  Sally flew back to Bangkok and I traveled alone around the Mekong Delta, and visited the notorious Cu Chi Tunnels, where thousands of people lived like moles during the war.

When I got back to Saigon, I decided to exit the country overland to Phnom Phen in Cambodia.   I was on my way to the Cambodian consulate with my passport when I was set upon my children selling postcards.  The next thing I knew my fanny pack had been unzipped under my shirt and my wallet with my passport was gone.  So much for going to Cambodia.  Instead I was introduced to the frustrating world of Vietnamese bureaucracy.  I was able to get a new passport from the US. consulate in a day, but it took more than a week to get an exit visa to leave the country.  Saigon is lively but not all that exciting after 4 or 5 days, and you cant check in to a hotel without giving them your passport to keep during your stay.   I somehow managed to get official permission to travel to Dalat for a few days on a government document.  It was the one place I really wanted to visit but hadn't, mainly because of the Spiderweb Mansion.

Dalat is a French colonial hill town with a population of about 200,000 people in the central highlands of the country.  Surrounded by pine plantation forest at an elevation of 4,900 feet (1,500 meters), the climate is temperate and the region supplies cool temperature crops for the mostly tropical country.  The vibrant market was heaped with giant cabbages at the time of my visit.


The city was founded by the French as a resort retreat from the sweltering low lands and is sometimes called the 'City of Eternal Spring'.  There is a French cathedral, train station, and many villas, including the summer villa of the last emperor of Vietnam, Bao Dai.  It is a popular destination for honeymooners, as made evident by geographical names like the 'Valley of Love' and 'Lake of Sighs'.  My accommodation was officially fixed, and turned out to be a huge musty room with 4 double beds (group honeymoons?) with pink floral satin sheets that made sparks in the dark when I came in to contact with them.  Definitely one of the stranger places I have ever stayed.

By far the most interesting site in Dalat is the Spiderweb Mansion, or Crazy House.  I went straight away, not wanting to linger in my satin dormitory.  It was dusk when I arrived but I easily spotted what in my journal I called "an amorphous glob of structures protruding from the surrounding French villas.
When I got to the gate a woman came and told me I needed to buy a ticket.  I told her I just wanted to take a peek, and would return tomorrow, at which point she handed me a menu and invited me in.  So I went to the dining room and ordered a hot milk and visited with a Vietnamese/French woman named Lillian, who had married an American serviceman many years ago.   She had traveled all over the world and was currently living in Seoul, Korea.  We talked for two hours while a woman worked at a desk in another room.  I assumed she was Dang Viet Nga, the person who created the Spiderweb mansion.  I never got a chance to talk to her though.  She studied architecture in Moscow and had obviously been influenced by the work of Antonio Gaudi in Barcelona, where I am going this winter, and the surrealist artist Salvador Dali, also from Spain.  Organic architecture is a wonderful thing but doesn't always go over well with conservative minds, including communist officials in Vietnam.  Fortunately for Hang Nga, as she is known, her father was a high ranking official under Ho Chi Minh, and later became president of the country in the 1980's.  In 1983 she moved to Dalat because of the climate and began construction on the Spiderweb Mansion complex and a few other less undulating buildings around the city.  She operates the Crazy House as a small hotel with varying themes in each room.

Said to resemble a banyan tree, the buildings twist up from the ground in to a tangle of vine like appendages that spread out to form trellises in to the garden.  Everything curves and twists in to other forms.  Stairs resemble little rice terraces curving down around trunk like posts, some covered in masonry snails.  Others are like stumps with liana vine railings.   The colors are earthy and natural to compliment the overlapping surfaces in a jungle faux bois.  Some forms are geologic, abstract and surreal, while others are literal, suggesting giant culms of bamboo, or animals, like a large giraffe, a bear, a tiger, an ant, and an eagle.

There are tall masonry mushrooms that lead me to think there might be some mycological inspiration growing in the surrounding forests, because this is a very trippy place in the realm of psychedelia.   Spiderwebs form aviaries with a variety of fowl inhabiting them. Living vines climb up through the masonry ones.  Other structures are emerging nearby and the complex has grown since I was there after looking at photos of a hotel booking site you can see at http://vietnam.com/hotels/Dalat/crazyhouse_hotel.html
It just gets more and more bizarre as if it were alive.  It would be so interesting to see it now having gained so much knowledge of art and architecture over the years.  I was so young and naive back then.  Also, shooting photos digitally makes it possible to take as many images as I want without the limitation of running out of film, so I tend to document things much more thoroughly these days.
There is also a good gallery of images of the Crazy House at http://izismile.com/2010/03/18/dalat_crazy_house_in_vietnam_51_pics.html

The Crazy House Hotel has unusual guest rooms in this curvaceous complex and I would have loved to have been residing here rather than my government sanctioned wedding dorm.   When I returned the next day I had a fruit salad  in the dining room and met a couple staying there who showed me their room.  The beds are amoebic in shape and probably hard to make with rectangular sheets and blankets.  There was an amoebic mirror over their bed in keeping with honeymoon atmosphere of the town.  The furnishings continue the rippling forms so contrary to architecture as we usually know it.  Little rounded windows with spider webbing look out on to other parts of the building and garden.  Children would love it here as it is full of imagination and fantasy.   There are visual surprises around every corner in constantly changing shapes.

At least one of Hang Nga's public buildings has been demolished apparently because it didn't compliment socialist ideals.  Her creation is unique in Vietnam, though I did see some inspiring art and interesting garden design in other parts of this rapidly emerging country.  The only other building I remember that she designed in Dalat is an A-frame style villa overlooking the lake.  It is nothing like the Spiderweb Mansion but does contain some interesting curved forms and windows.

At any rate, if my passport hadn't been pick pocketed, I never would have come here, and I am so glad that I did.  I wrote in my journal back then that if I had to live in Vietnam, I would want to live in Dalat.


I'm excited to be returning to Barcelona after 24 years since the last time I was there.  The work of Antonio Gaudi changed my life's path as a creator of gardens and art, as it seems to have done to the Vietnamese architect Hang Nga.  The French artist Niki de Saint Phalle, a prolific woman I plan to write about was also thrown in to the organic realm of expression after being exposed to his creations.  May we continue get away with creating more undulating wonders for the World to behold!  Thanks for reading this.

Posted by Jeffreygardens at 12:09 PM