Morocco and my work


I am in Morocco again for the second of what may be a continuing series of trips to discover and revisit all that is wonderful about this country.  For over 20 years I have been inspired by it's art, and this has been reflected in my work and my home for at least as long as that.  Several years ago I purchased the Taschen Press book 'Moroccan Interiors', and poured over the pages absorbing the rich colors and patterns that have been a part of North African history for over 1,000 years.  I painted rooms in my house to capture the ambience I saw in Yve Saint Laurent's house at the Villa Oasis and the Jardin Majorelle in Marrakesh, which is featured in the book.
I taught myself how to cut tile and made my own zellijes emulating the style of tile work found there.  I used a selection of tile seconds from the Pratt and Larson company in Portland, Oregon to create a zellij in the kitchen of my home.  They manufacture tiles that can be assembled to create zellij like patterns.  I like the hand cut look, and only used their 8 pointed star tiles, which I gold leafed.  I hand cut the rest of the tiles using a score and snap tile cutter and hand tile nippers.  I now own a Moroccan tile cutting hammer because I can no longer use the nippers as they aggravate my tendonitis.
I have built a number of pebble mosaics using Arabic tessalate geometric designs that originated in Morocco as well.  One Portland garden has a long path running down a side garden.  At a halfway point, I built a small patio with a bench and a fountain that is visible from the long terrace that wraps around this historic home, with an eight pointed star and geometric patterns radiating out in a simple square frame.
In a garden in Los Angeles I have incorporated several Moroccan inspired mosaics and a sunken garden,  inspired by the client's love of the country and it's arts and design.  The first project was to build a pebble mosaic carpet.  This elaborate design took a month to lay out and set.  I first arranged the entire mosaic in a bed of sand on site and then disassembled it and set it in mortar, using forms to break it up in to sections. 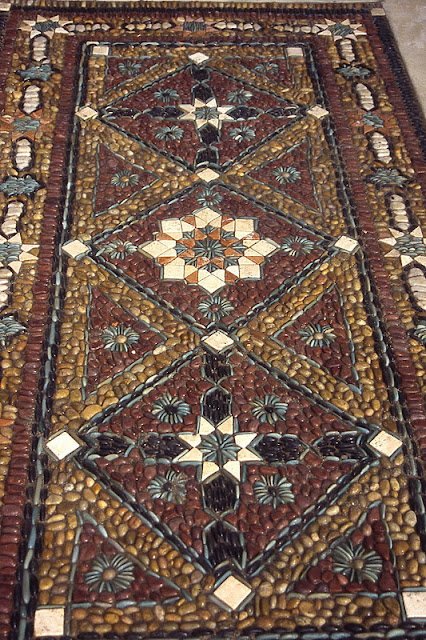 I was also commissioned to build a fountain  covering a concrete block form that was not of my design.  I was not particularly happy with the shape that I had to work with but I made the most of it.  Water flows in a sheet from a copper ledge over a 'Tree of Life' mosaic that is fashioned after a Liquidambar Sweet Gum tree adjacent to the fountain.  The tree mosaic is framed with a band of eight pointed stars and connecting bands, similar to the carpet mosaic.  The fountain is surrounded in white glazed brick to cover the sides of the concrete block form and pool, matching the white brick walls on the first story of the house. 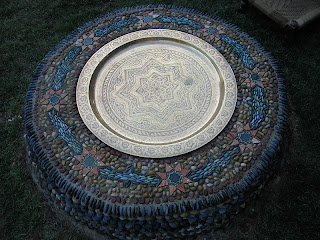 My next commision in the garden was to build a round gas fire pit for gatherings on cool evenings to roast marshmallows.  I built up bands of pebble mosaic using black and gold Mexican beach pebbles and then capped the ring with a band of eight pointed stars matching the other mosaics in the garden.  The stars are made of Turkish limestone tiles that I cut with a stone cutting blade.  The fire pit is connected to a natural gas line and has a double round metal ring perforated with holes that is covered in black gravel.  A Moroccan brass tray fits over the fire pit when it is not in use.
We also erected a restored Indonesian pavilion in the garden to use as a tea house.  I recycled carved wooden panels from the roof of an old Rajasthani swing from India to use as steps, and built a landing incorporating the eight pointed star motif, and red pebbles to compliment the wood steps.
My last big project for the garden was to remodel an area that once contained a sunken trampoline.  You an see the essay that I wrote on this project called 'A Sunken Garden'.  We removed a large trampoline and I built a sunken garden utilizing the hole that was there.  I was inspired by the shape of a Moroccan key hole door in designing the space.  We stenciled a border around the wall, and I added a fountain and Moroccan tiled table and chairs to furnish the space.
I was commissioned to build a cut slate roof terrace on an elaborate new underground garage for clients in Portland, to be used as a terrace for entertaining and dancing.  I used the eight pointed star design again in repeated medallions framed by colored bands of cut stone.  This was probably the most difficult project I have ever undertaken as it had to drain perfectly in to two very small drains on one side.  The terrace is quite large and took about 3 months to build.  The colors of the stone reflect those of the imposing house adjacent to it.  It is quite an elegant space, considering that there are two cars parked underneath it, and they have had some lovely tango parties on it, so that it is now called 'The Tango Terrace'.
I've been working with a steel fabricator for several years now to build wonderful steel structures in my garden and some of my client's projects.  We cut these beautiful tesselate medallions to hang on walls and fences or trellises.  This pattern is a classic Moroccan design, representing a story from the Koran, where the Prophet Mohammed, escaping men who were pursuing him in order to kill him, hid in a cave.  A spider built a web across the entrance to the cave, so when the men came, they saw the web and decided he could not be inside as the web would have been broken.  The rays emanating from the central star represent a spider's web.
I have been collecting Moroccan lanterns over the years as I love to light my garden at night with candles.  The patterns that spray across the garden through the lattice patterns cut in the metal, and the colors of the glass are quite magical. 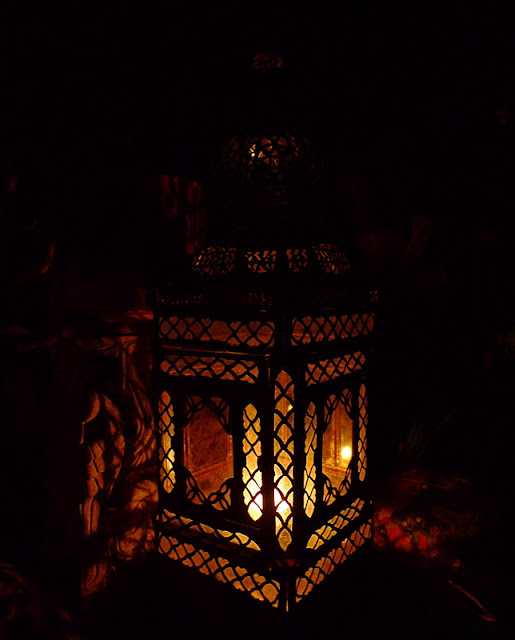 I was first inspired to float flowers in water filled bowls in my garden by an article I saw many years ago about the Hotel La Mamounia in Marrakesh.  There they had strewn rose petals in the fountains, an idea I find quite beautiful, ritualistic, and romantic.

Dahlias are my favorite flower to float in water as they look like fabulous water lilies, and last for days if the raccoons don't come along at night and shred them to bits, which they love to do.
I now have a small library of books on Moroccan design and gardens.  Perhaps the finest of all the books I own is called 'Arabesques, Decorative Art in Morocco', from ACR Publications.  This incredible book takes on the daunting task of defining the mind boggling complexity of geometric patterning in tile, painting, marquetry, stucco carving, and most amazing of all, three dimensional muqarnas.

The reason I am so fascinated and inspired by Moroccan design and that I have incorporated so much of the influence in my own work is that I find the artistic expression found in that country to be some of the most beautiful and profoundly meaningful I have ever encountered.  I am forever grateful to have the luxury of exploring this magical land and to see first hand the treasures that it has bestowed upon humanity.


Thanks for reading this, Jeffrey
Posted by Jeffreygardens at 1:57 AM