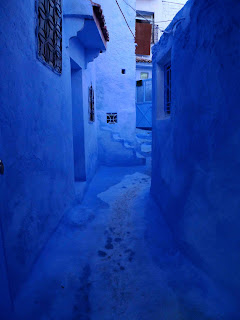 I’ve been in the town of Chefchaouen in the Rif Mountains of Morocco for a few days now.  It is called the ‘Blue city’ because of the predominant blue wash that is painted over the whitewashed houses and shops.  The shades of blue vary in intensity and cast an icy glow over the narrow alleyways of the Medina in winter.  The blues are so striking as to change the way a person feels as they stroll the lanes.  People seem more laid back here.  Part of that could be that an estimated 40% of the World’s crop of Marijuana is grown here, but I think the color plays a significant role in the town’s mood.

After asking around, locals here told me that the Jewish community that lived here started the tradition in the 1930’s, though the town is several centuries old.  The blue color is supposed to ward off the Summer mosquitoes, who apparently read the color as clear water, and because mosquitoes like still, brackish water, they will move on.  When I ask if it really works the answer is always yes.  The Oudaia neighborhood in the Kasbah in the capitol of Rabat is also washed in a lighter shade of blue for this same reason.  Blue mosquito repellent!  The traditional pigment creating the blue color would be natural indigo.

I am a firm believer that color triggers chemical responses in our brain that actually change us physically.  That can be stimulating and exciting, sensuous and erotic, or calming and soothing.  The colors green and gold are the colors of Islam, alluding to the green lushness of Paradise and gold representing spiritual wealth.  Sufi Saints tombs, called  Zawiyas, which are shrines, always have green doors.  The glazed tile roofs of Mosques are a rich shade of green.  The color ochre, or brown is the color of walls on the outside of Mosques and Kasbahs, and represents the Earth and dust, from which we physically return.  Arabs paint their houses ochre.  Saffron is a source of yellow.


Because Islam does not use images of people or animals in its decoration, colors and symbols and script set the mood.  There are colors for all the emotions.  White is the color of Sunni Muslims, which is the principal sect in Morocco.  It is the predominant color inside Mosques.  White also symbolizes peace, and purity, and is used by Jewish families to paint their houses.  Black is the color of Shiite Islam.  It is the night sky over the desert, and is said to have been a color used by Mohammed.  Tuaregs from the Sahara paint their houses a dark charcoal color.  If a family intermarries between tribes, then the house is
painted the two representative colors. 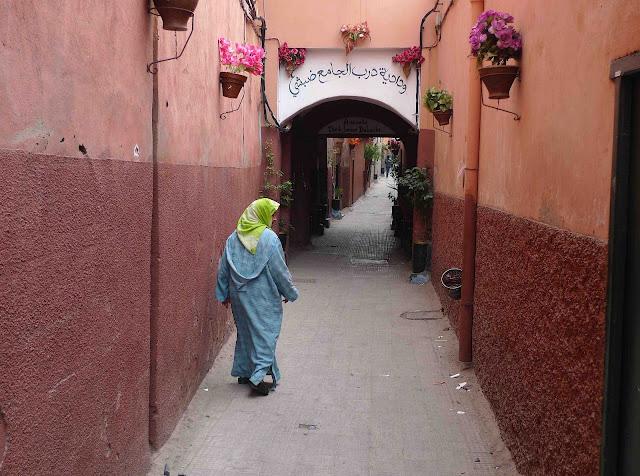 Red, or Rose is the color of Marrakesh, an Imperial city tinted with the natural color of Tabla, a red clay from the Haouz Plains west of the city.  This is mixed with water and then spread on buildings.  It dries to a salmon pink shade that also glows in the evening.  This color suits Marrakesh’s location on a plain with the Atlas Mountains rising dramatically on the horizon.  Berbers paint their houses red.  It is also the color of the Royal family of Morocco.  Poppy petals are used as a natural pigment in dying things red.

Another iconic color in Marrakesh is Majorelle Blue, a shade of intense blue created by the French artist Jacques Majorelle to embellish the garden and studio he built near the Ville Nouvelle (see my blog on the Majorelle Garden for an array of photos and an essay on the garden.)  It has become trendy to use this darker shade of blue in gardens and courtyards around the city and it looks incredible juxtaposed with greenery.

Blue, the color of water and the sky, is also the color of the Imperial city of Fes, which is the center for artisanship in Morocco.  Fassi painters are the most sought after in Morocco for finely ornamented ceilings, doors and furniture.  15% of the population of the city is in an artisan trade.  Fine fabrics are embroidered, soft leather is tanned and dyed a myriad of colors, and wood is inlaid and painted.

Zellij, the art of cutting tile also finds it’s finest expression in Fez.  The colors of the tiles again tell a story, and blue tiles are important in Fassi zellij mosaics.  The tiles are rolled,  flattened, trimmed, cured, bisqued, glazed, and often glazed again.  Then designs are drawn on with a liquid white chalk and a man with a sharpened hand adz expertly chips away the outlines on a sharp edged base mounted to the ground.  All of this work is done sitting on the floor.  We watched as the tile cutter made perfect 8 pointed stars.  Zellij requires many thousands of repeated shapes arranged in patterns that can be extended in to infinity.  Stars play a significant roll in the designs, interlocking with points and squares and foliage curves to create mesmerizing and meaningful patterns for the embellishment of door and window frames, gates, minarets, domes, wainscotings and floors.

Finely wrought metal lanterns are also a trademark of Morocco.  Colored glass is frequently used to cast an array of jewel tones about the walls and ceilings or the rooms they are illuminating.  The patterns add another level of magic when night falls that can be so beautiful as to be enchanting.
As long as I have had a place I have used rich, saturated colors absorbed from the World at large to enliven my home.  One of my first trips was to the Yucatan, and on returning I painted everything that telltale shade of turquoise that is the Caribbean Sea.  When I first saw photos of the Majorelle Garden, I painted my back doors that vivid blue, which matches the Glenora seedless grapes that drape over it in September.  A fabulous shade of mint and medium green trimmed with gold connects a bedroom to its view of the garden.  This was inspired by photos of an incredible room in Yves Saint Laurent and his partner Pierre Berge’s villa next to the Majorelle Garden.  Another is melon yellow with a deep purple blue ceiling.

The ceiling of the massage school at Wat Po in Bangkok inspired me to paint my living room ceilings marigold yellow.  There was something heartwarming that came from getting a massage and gazing at that rich golden yellow.  Marigold garlands are draped on everything from temples to cars for festivals and weddings.

The foundations of my two houses are the maroon of Tibetan Monks robes, and the other was recently painted Majorelle blue as inspiration for this winter’s adventure.  One of the things that set that blue off in the Marrakesh garden were ceramic pots painted in the powder and water washes that are used on stucco and mud brick houses.  Shades of sherbet orange, lemony yellow, turquoise, and dark and light blues play off the luxuriant foliage and vivid blue walls throughout the garden.

When people come through my house or garden they sometimes comment on how different they feel a short time later.  Sometimes a person will gasp, seeing the blood red floors and warm yellow walls and metallic gold trim.  It is a rich pallet that feeds the eye and sends pleasing responses to the brain, which then secretes positive chemicals in to the system, bringing about a feeling of well being and even better health.  We as gardeners know that the many shades of green foliage and the brilliance of flowers we cultivate is food for the soul.

Posted by Jeffreygardens at 7:01 PM 13 comments: