In 1984 I made my first trip to Mexico City.  It was the year before the great earthquake which struck the city on September 19th the following year.  I stayed in a hotel off the Alameda Central Park in the Centro Storico that had a large photo mural of Mt. Hood in Oregon in its lobby.  The hotel I stayed in was destroyed in the earthquake.  One of the places I visited while there was the fabled Hotel Del Prado on the Parque Alameda Central, who's lobby contained the grand mural "Dream of a Sunday Afternoon in Alameda Central" by the artist Diego Rivera.  The hotel had an art deco style and there were columns that obscured parts of the mural.
This was my second foray in to Mexico, the country where I honed my skills as a world traveler.  I was quite naive at that point and had never seen artistry on such a scale.  The work had a profound affect on me as I was swept up in the epic tales of Mexican history.
The mural was originally commissioned by the prominent Mexican architect Carlos Obregón Santacilia for the west wall of the Versailles Restaurant, but it was later moved to the lobby because the wall was sinking because of its weight, causing cracks, and humidity in the dining room was damaging the painting.  Curtains in the restaurant also obscured sections of the mural, which could be closed perhaps because of controversial elements in the painting that offended conservative Catholics and Capitalists.
Rivera painted the mural in 1946 and 47.  It is 15 meters long and 5 meter tall and weighs 35 tons with the supporting wall included.  The painting represents a dream, which allows it to cover 400 years of Mexican history, with 100 definable people incorporated in its narrative.
The 1985 earthquake registered 8.1 on the Richter scale, followed by two later powerful aftershocks which collapsed about 400 buildings and severely damaging a thousand others which had to be demolished.  The death toll was over 5,000 people.  The soft sediments that underlies Mexico City, which is built on what was once Lake Texcoco make for an undulating base during seismic activity.  The lake was subsequently drained in by the Spanish after the conquest of the Aztec capitol of Tenochtitlan.  Mexico City has the most dramatically altered landscape of any city in the world.  The vibration of the ground was amplified in buildings ranging from 6 to 15 stories tall as they shook at the same frequency.  Most ancient colonial buildings in Mexico have survived a number of earthquakes because they are less than 6 stories tall.  I returned to Mexico City in January 1986 and was shocked to see so many buildings that were no longer there.
The Hotel Del Prado was irreparably damaged and had to be demolished but the mural survived relatively unharmed.  It was padded with rubber mattresses and wooden panels and while being seranaded by Mariachis, was lifted by crane and relocated to it's new home across the street.  It took 12 hours to complete the move, and the building where it is housed today, the Museo Mural Diego Rivera was later built around it.

The mural represents a dream, which allows it to cover four centuries of Mexican history in a colorfully dramatic display.  It reads from left to right, beginning the the Spanish conquest of what became New Spain and ending with the relative political stability of the mid 20th Century.
On the left side Conquistador Hernan Cortez is depicted with bloody praying hands, as his Catholic faith was the justification for the rapid destruction and subjugation of once great indigenous cultures.  Fray Juan de Zumárraga, the first bishop and leader of the Holy Inquisition stands next to him.  The poetess and early protagonist of women's rights, Juana Inés de la Cruz wears a nun's habit, next to the eighth Viceroy of New Spain, Luis de Velasco II, who instigated the creation of the Alameda Central Park in 1592, on what was formerly and Aztec marketplace.  Looming large in the background is Benito Juarez who served as the 26th President of Mexico.  He was driven in to exile during the French invasion, when the Austrian Hapsburg royal family member Maximilian was declared Emporer of Mexico.  Maximillion was executed when Juarez regained control of the country after the brutal execution of 10,000 of Juarez's supporters.  He is depicted in significantly smaller size with his wife, Empress Carlota to the left of a cluster of colorful balloons. 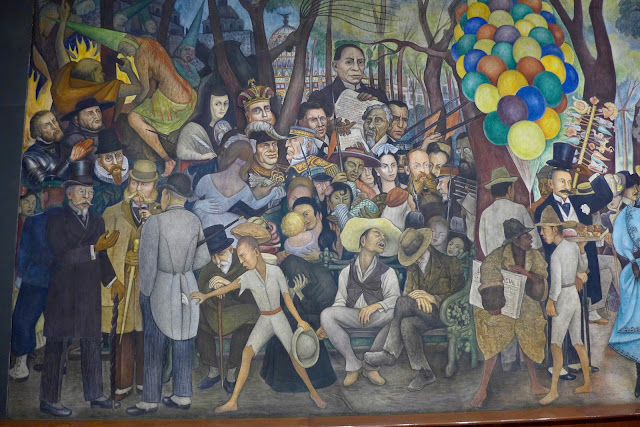 This side of the mural shows the conquest of New Spain, the Inquisition, the French invasion, petty thievery, and two borrachos on a park bench, oblivious to it all.
The Alameda Central is considered the oldest public park in the Americas.  It was created as a green space on the Western edge of the growing city with a formal layout of straight interesecting paths marked by fountains.  The name Alameda is derived from Poplar Trees (Alamos) which are planted throughout the park.  The park used to be half the size of what you see today and was just an open space called El Quemedero, that was used as a place to burn heretics during the Inquisition.  A charming beginning for the first park in the Americas.  By 1770 the Inquisition had come to an end and the plaza was demolished to enlarge the park.  It was expanded again in 1791 and a wooden fence was built around it to make it exclusive to nobility.  Mexico declared independence from European rule in 1821, and the park became a popular place to celebrate freedom from colonial rule.  When General Santa Anna rode in to Mexico City he ordered the fountains in the park be filled with alcohol.  That must have been a messy party.
There are five fountains with round basins containing French designed statues with Roman themes.  One of them holds a muscular figure of Poseidon wielding a trident that I fell in love with on my first visit in 1985.  I always walk by it when I return to the park over the years as if visiting an old friend.
The park as you see it today was mostly developed in the late 19th and early 20th Century and by then had become popular with all social classes.  The mixing and resulting struggles between the rich and poor and European and Indigenous peoples is clear in the mural.  In 2012 the park underwent improvements with the paving of the paths with smooth marble tiles and modifications to some fountains with popular jets of water spouting from the pavement for children to play in on hot days.
The center of the Diego Rivera's mural has interesting dynamics.  The centerpiece is the Calavera de la Catrina.  Catrina was a nickname for an upper class woman who wore European dress.  In 1913, political cartoonist José Guadalupe Posada created an etching depicting Catrina as a skeleton, as death is the great equalizer.
Diego Rivera replicated this etching in homage to the cartoonist who died in obscurity.  He wears a dark suit and bowler hat and affectionately locks arms with the Catrina on her right hand side.  She wears a feather boa with a snakes head, a representation of the god Quetzalcoatl, the feathered serpent which is frequently represented on Precolombian religious structures.  Her belt buckle is ornamented with an Aztec symbol.
Rivera painted himself as a boy, the boy who has the dream, holding hands with the Catrina on her left.  Behind him stands his wife of 25 years, Frida Kahlo, with one hand resting protectively on his shoulder.  In her other hand she holds and yang and yin symbol, which speaks to the dynamics of their troubled relationship.  Frida Kahlo was bedridden from a serious trolley accident during the time he was painting the mural which may have influenced him painting himself as a boy, expressing some insecurity.  Yang and Yin represents male and female duality, dark and light, good and bad.  The dream is also a nightmare.  She referred to him as the Toad, one of which he carries in his pocket.  He holds a vulture headed umbrella in his right hand.
The noble classes promenade in their Sunday finery under the protective gaze of dictator Porfirio Diaz, decked out in an elaborate military costume and a plumed hat.  A soldier with a club confronts a finely dressed Mayan girl in a gesture of segregation. 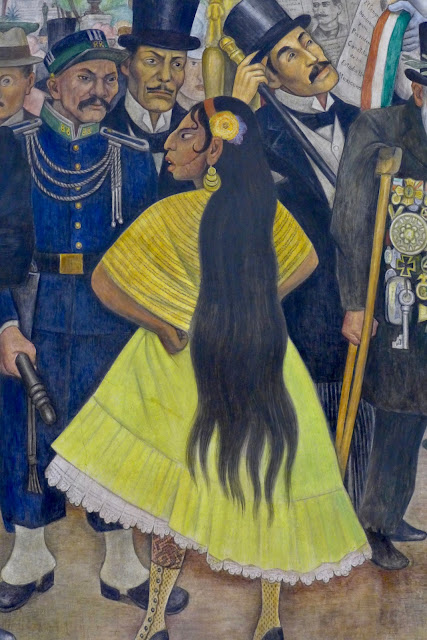 The struggle between classes is clear throughout the mural.  Diaz's dictatorship is overthrown in the Mexican revolution, which lasted 10 years.  A Zapatista (follower of revolutionary Emiliano Zapata, who inspired the agrarian movement) rides a horse while another shoots a man in the head.  Even though democracy and reforms brings Mexico in to a new and more hopeful era, the classes are still segregated by police forces according to class.  Beyond them in the trees in front of a Mexican flag, President Francisco Madero tips his hat.  He assumed the presidency after the fall of Porfirio Diaz's 6 term dictatorship, starting the Mexican Revolution.  But he violently opposed the Zapatistas and was later assasinated in a coup during a period called the 10 tragic days. 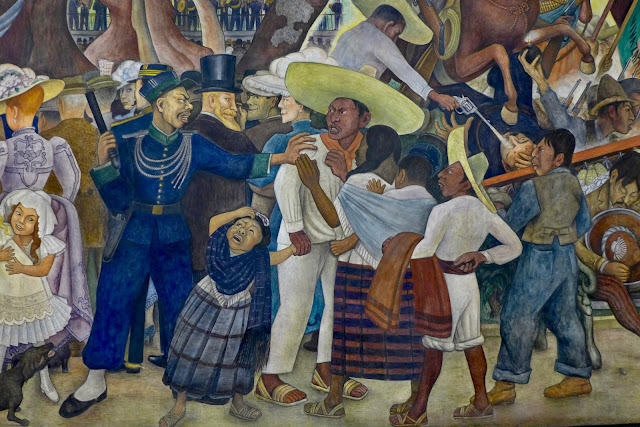 But as the mural moves further to the right side, there is a more peaceful resolve that comes perhaps from hope for the future, intertwining with the branches of the trees.  The dome of the Palacio Bellas Artes is seen the background, along with the Torre Latinoamerica.  The workers wave flags, while menacing gazes lurk amongst the crowd, who all have identities and significant meanings in the political struggles that followed the fall of the Madero government.  Men with stacks of money represent the corruption and disparity of the distribution of wealth.  In the bottom right hand corner, Diego as a middle class boy eats a Torta de Jamon purchased from an indigenous woman sitting at a table.  He is surrounded by his family as he dreams them, including his daughters Ruth and Guadalupe Rivera Marin and their mother Guadalupe Marin, the second of his four wives. 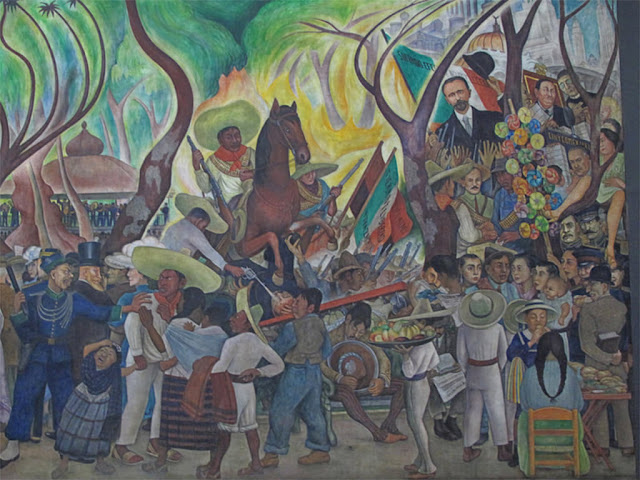 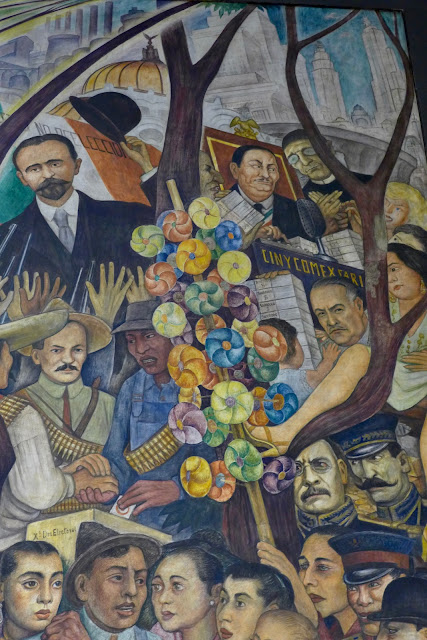 And so the epic dream of a Sunday afternoon in the oldest public park in the Americas plays itself out in the never ending drama that is the history of Mexico.  Its been overwhelming but very educational to research this essay and I have a vaguely improved insight in to the history of the republic.  I love this country and am so happy to have the opportunity to revisit and explore its many fascinating and beautiful landscapes, ruins, cities and towns over the years.
Thanks always for reading, Jeffrey