Some 20 years ago I saw photos of a garden in Morocco with  the most extraordinary electric blue walls and lush plantings.  I was captivated by the vivid hue of blue and after some searching, managed to find a close approximation at a local hardware store.  I bought a gallon and painted my bedroom ceiling and back door.  A Glenora seedless grape I had planted and trained over the door and bedroom window takes on a similar hue when the fruit is ripe making a delicious color combination.

This past summer I bought another gallon and painted the foundation of my house as if in anticipation of what I hoped would be the fulfillment of a dream to travel in Morocco and visit the garden where this blue color made it’s debut.  A few months later  I was there.

The place is the Majorelle Garden in Marrakesh.  Jacques Majorelle was a French painter who’s garden became his ultimate creation.   Born in 1886 in Nancy France, he was the son of Louis Majorelle,  a famous furniture designer in the Art Nouveau style.  He went on to study painting at the Ecole de Beaux-Arts in his home town and later in Paris.  In 1910 he  traveled to Egypt and became captivated by Northern Africa.  9 years later he went to Marrakesh, Morocco to recover from heart problems caused by Tuberculosis.  Establishing himself with the French upper class in the city, he acquired a 9 acre property in palm groves of the El Hassania district outside the city and built a villa.  In 1924 he commenced to build a painting studio designed by the architect  Paul Sinior, which he painted the iconic color of blue he developed and named after himself as Majorelle bleu.  He even had the color patented.   Shortly after that he began to transform the palm grove in to a botanical garden.

He continued to paint and travel in Africa in a style that could be categorized as Orientalism, but is more specific to actual experience rather than romantic conceptualism.  At the same time he became an avid collector of plants.  The garden contains many species of palms, aloes, succulents, yuccas and bamboos. There are two massive specimens of Beucarnia recurvata, the Ponytail Palm, near the painting studio.  Numerous cactus, which are all native to the Western Hemisphere, and Euphorbias, native to the Eastern Hemisphere surround a shallow pale turquoise pool with a blue central fountain.  A long axial pool runs perpendicular to the pond, terminating at a pavilion painted mint green with a carved white  stucco band and a green glazed tile roof in the Moroccan style. Bougainvilleas were planted on walls and trellises for their vivid colors, and a large square pond was filled with a collection of water lilies.  He opened the garden to the public in 1947.

The blue painted walls and pool edges give the garden a cohesive cooling feel.  Clay pots painted in bright lemon, orange, and blue line the raised polished terracotta colored cement paths that wind through immaculately maintained beds of carefully spaced plants.  It is these vivid colors that give the garden it’s signature character.  Their brilliant hues set off the various shades of green and blue in the plants.  The ground is mulched with a pink crushed stone that is native to the area and is the predominant color of buildings in Marakkesh.  Plant specimens are ringed in carefully sculpted craters to maximize the absorbsion of water in this hot dry climate.   A crew of gardeners continuously rake the ground of every last leaf and petal except in the bamboo groves, which probably need the mulch and defy tidiness.  Numerous species of birds are attracted to the garden because of it’s lushness and the availability of water.

Majorelle was the victim of two automobile accidents, the first after which he had his foot amputated.  He returned to France after the second accident in 1962, and died shortly afterwards.  The garden remained open to the public but went in to decline from lack of maintenance.

In 1980, fashion icon Yves Saint Laurent and his partner Pierre Berge’ purchased and restored the property, supervised by the American landscape architect Madison Cox.  The Moroccan botanist Abderrazak Ben Chaabane was responsible for the redesigning of the plant collections.  Yves Saint Laurent and Pierre Berge lived in the house until Saint Laurent’s death in November 2009 on the adjacent property called Villa Oasis.  These extensive gardens are unfortunately not open to the public, though there is a tantalizing view  through a small window grille from the street.  I hoped to find a way to visit but so far have not been successful. 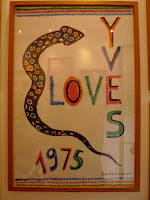 The painting studio was converted in to a Museum of Islamic Arts, displaying the couple’s collection.  At the time of my visit there is a wonderful exhibit of African inspired fashion by Saint Laurent.  The exhibit was designed by Pierre Berger using fragrant cedar wood wall panels cut with Moroccan door shapes and an incredible round room lined with large mirrors, and a ceiling of LED lights mimicking stars that reflect in to infinity.  An adjacent building contains an elegant gift shop, café courtyard, and a small gallery displaying New Years collages that Saint Laurent made every year to send to clients and friends.  The message was always love.  There is a simple monument to him on the far side of the garden, a marble plinth with an ancient weathered fluted column standing at it’s center.  His ashes were spread in the garden as was his wish.

When I get home I am definitely going to try my hand at painting some terra cotta pots, and my old house could use a coat of paint too to compliment the Majorelle blue foundation that I painted this summer.  Perhaps mint green and turquoise with a lemon trim and some orange.  I like to do things that remind me of places I have visited that I love and want to bring in to my consciousness on a daily basis.

Summers are incredibly hot in Marrakesh, and the shade and cooling colors of the garden make for a welcome respite from the harshness of the climate.  In the winter the weather is mild, pleasantly warm in the day time and chilly to downright cold at night.  The light in winter is beautiful and there are great sunsets to be had after the garden closes at 5 in the evening.  Once in a more suburban setting, the garden is now walled in by luxury condominium buildings and heavy traffic as Marrakesh explodes with development.  Jacques Majorelle would not recognize his old neighborhood.


The garden was ridiculously crowded the first day that I visited as Marrakesh was full of tourists for the New Years holiday.  The city had become a very trendy destination, with the garden being one of it’s primary draws.  So I returned early the next morning and was the first person to enter that day, for a short and blissful time having the garden to myself.  There was a mourning dove drinking from the lovely tiled entry fountain when I walked in.  And then the first busload of people arrived…


Posted by Jeffreygardens at 4:03 PM