In 2005 I was asked to create a parking strip mosaic for clients in the historic Irvington neighborhood of Portland.  I  discussed this mosaic in my last post about meaning in my work.  The couple had spent time and fallen in love with the city of Barcelona, Spain, and that city's famed artist, Joan Miro.

We decided to create a mosaic based on Miro's style.  After reading a large book on his work I learned that the symbols used in Miro's artwork are something like an alphabet that tells stories about his life.  So I used the essence of various paintings to draw up various concepts for a mosaic about 6 by 8 feet (2 by 2.5 meters) in size.  The design we opted for was an abstract rendering of Kathleen giving birth to their daughters, and the relationship of that event to the Earth and the cosmos.

The pebbles and stones I used for the mosaic were sorted in a stone supply yard, the black being Mexican beach pebbles, and the colors sorted from a large pile of rainbow mix pebbles from the state of Montana.  Because there are a variety of colors in that mix I was able to separate a number of different colors.  The pebble colors that were left over became the back ground because the background in Miro's paintings is one of the most interesting parts of his work, with many layers of color overlaying each other.  Sweeping lines and loops create the body of the woman, curving down and out to an the formation of a child in the womb.  A line crossing her leg is a bird, a symbol often seen in Miro's work to allude to transcendence or flight.
This dramatic mosaic creates a threshold to the garden from the street and is a landmark to help people find the house.

Behind the house the couple built an inexpensive patio using recycled concrete from the demolition at another of my projects.  Because there were large gaps between the pieces, somebody fell and sprained thier ankle stepping in one of the holes, so they asked me to come back and fill the larger gaps with pebble mosaic.  We pulled some of the pieces and composed a filler mosaic that related to the Miro inspired mosaic in front of the house.  A couple of years later they removed an handsome but imposing garage from the south side of the back garden to create more space in the tiny yard, which opened up the opportunity to expand the patio and build a curving  seat height retaining wall for a new planting bed.

We ordered pallets of large river rock to compliment the river rock used in the foundation, columns, and fireplace on the historic house.  The wall form became that of a snake, remeniscent of the work of Antonio Gaudi in Barcelona, with a sensuous curve that looks good from every direction.  The new patio mosaic connects to the less appealing (for me) work I did earlier around the broken pieces of concrete.

After looking at a number of paintings we decided on one called 'Ciphers and Constellations in Love with a Woman'.  Miro's Constellation paintings are a scattering of cosmic symbols with lines curving through them.  Where lines intersect, creating framed spaces, he filled them with blocks of color.  The woman, interspersed in a somewhat cubist way in to the cosmos represents a trancendence of the Spanish Civil War, when Franco's fascist troupes were overrunning the country of Spain.  This was a very dark period for the culture of Spain, and Miro looked to the greater universe for solice.  At the center of the mosaic is an abstract vulva, representing sex and desire and fertility.  The eyes are on opposite ends of the patio along with a very abstract foot.

I ran lines of Mexican beach pebbles throughout the mosaic that the eye can follow.  They run up and down the wall as well to connect it to the patio.  Making these reminded me of when I was a child playing with Matchbox cars, the lines being roads that you would drive down.  Little symbols of a line with two balls on either end I call 'barbells', and there are some literal stars worked in to the design.

The end result is something you can sit for hours and stare at, resulting in a contemplation of the universe and our relationship with it.  The view from the upstairs rooms is fantastic as from a distance it reads like a painting. 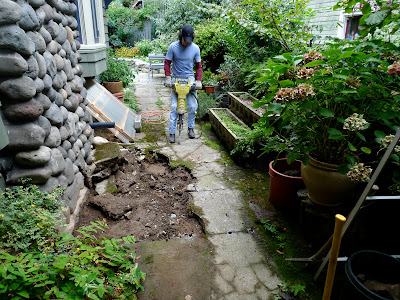 In 2010 I was asked to come back and remove a large section of the drive way, which we opened up and graveled to improve its permeability and make a more pleasing link down the side of the house to the patio.  I also removed the old concrete front walk and created a new entryway, with paths leading to the driveway and the other side of the house.

This time I used a local stone from a quarry in the Molalla area south of Portland to create stepping pads, with pebble mosaic in composed gaps.  This design connects to the mosaic work in the back around the broken concrete pieces, and to the original concrete steps, the driveway, and the sidewalk in front of the house.

I arranged the stone and cut and tightly fitted it together in 3 rectangular pads leading to a landing at the base of the front steps of the house, and filled the gaps with pebble mosaic that connects to the other Miro inspired mosaics in the garden.  The gaps between the rectangles allows for permeability in the pavement, and for the garden to flow through the work in planted lines.


The two side paths leading off the main entry path are more free form in shape because they are curved and the plantings are naturalistic.  A set of curved steps leads down to the sloped part of the driveway.  It was a great deal of work to shape the thick stones used in the steps to fit tightly together.


Lastly I built a small mosaic at the base of the stairs by the sidewalk where the original concrete pavement had been heaved by a large tree, causing a tripping hazard.  This little mosaic bridges the first mosaic in the parking strip to the walkway above.

Eventually my clients decided to remove the driveway ramp leading up to where the new steps connected it.  It was too narrow to use as a driveway and was in poor condition.  They planned a trip to Kyoto, Japan, so we decided to create a stone stair that would take you up the slope with some influence from Japanese stonework, which I have studied over the years.

Two terraces were added where the walkway from the front entryway connects to where the driveway was.  The Miro inspired mosaic inserts allude to a spring emerging from a hillside, which flows down the steps like a small cascade.


To connect the new terraces, which provide space for a potting bench on the upper terrace or a place to park bicycles, is an altar centered on the steps leading down from the front garden.  This is built in to the existing river rock retaining wall to integrate the two together and create a small ceremonial space for contemplation.


The curb cut apron where the driveway entered the street was removed and a new curb poured, which made it possible to build stone pads in the final phase of the gardens development.  I built two rectangular pads, one the width of the original driveway to make it easy to get out of a parked car, and a smaller one connecting to the sidewalk to form an assymetrical balance, with gaps between them for permeability.  I filled the gaps in the stone work with mosaic that visually ties in with the rest of the flowing Miro inspired forms running throughout the garden.  It is the connecting thread that ties all of the garden's structure together.

Large river stones were placed along the edges of the new steps and around the parking strip landing to add to the feel of a stream cascading down the hill and flowing in to the street.

Each of the areas built at different times has an individual treatment based on where it is in relationship to the house, but all of them are interconnected by the design running through them.  It is not easy to hurry through this garden as the pavements are something worth stopping to admire.  You can sit on the front steps and gaze at the composition of the entry walk.  The back garden is mezmerizing.  The structure of the garden is a work of art inspired by the couple's desire to have something rich and meaningful surrounding their beautiful home.  It is a pleasure to work on projects like these.  They are very hard work but the work so worthwhile!  As I get older I see my years as a builder with stone are numbered, and I hope that any work that I do until then has the depth and richness that the Miro mosaics embody.


Posted by Jeffreygardens at 2:16 PM