On December 5th I am returning to a place I haven't been in 23 years, the beautiful country of Spain.  My first trip to Europe in 1987 was one of the formative ones that showed me what I was capable of doing as a traveler later on.  This trip was also a pilgrimage, much like last winter's adventures in Italy.
When I was going to the University of Oregon, landscape architecture students were treated to a lecture on the Alhambra and Moorish palaces of Spain as part of a lecture series  by Professor Ron Lovinger, teaching about Vernacular in the Landscape.   Vernacular, or the "Sense of Place" is when a landscape becomes an identifying feature of the environment in relation to humanity.  It tells the story of why it is there.  With the spread of information and advances in transportation, landscapes often become more cosmopolitan, or international.  In a sense these places loose their relationship with both the environment and humanity.

Seeing Moorish architecture first hand changed my life.  The breathtaking order in which spaces and surfaces are treated  is some of the most appealing ornamentation I have ever seen.  Nature and math are blended in to designs in stucco relief, wood marquetry, tile zelliges, and pebble mosaic.   The last two art forms became a key part of my life's work from then on.

Across the Straight of Gibraltar from Spain lies Morocco, a land I have always wanted to visit.  I found in my research that Morocco was the first sovereignty to recognize the United States of America as an independent country from the British.  There are similarities in the style of some architecture between Spain and Morocco but due to vernacular, there are distinctions that I want to observe.

After a week in Madrid I will fly to Fez, where I am meeting a couple of friends I met in Rome at a wild New Years party I threw in my lovely sublet there.  And thus will begin my Moroccan adventure.  I have no set plan beyond Fez, just a desire to return to Andalusia in Spain in early February to visit Cadiz, Jerez de la Frontera, Ronda, Cordoba, and Granada before returning to Madrid.  I will be writing essays on various subjects and gardens along the way to post here with photo galleries.

The photo of me is in the Patio de los Leones, the Court of the Lions, in the Alhambra in Granada.  I was 28 years old and still tucked my shirt in like my Mother always told me to do. 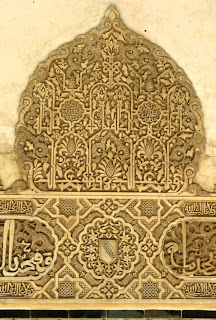