In 1998 I bought the house next door, what had been for over a decade a Crack House.  The house had a violent and disturbing history that could be worthy of a Quentin Tarentino movie.  Previous to my purchasing the house, it sat boarded up and vacant for two years after a drive by shooting, a rotting carcass of years of abuse.  I filled a full size dumpster cleaning out the house and another clearing out the garbage from the back yard that had accumulated over many years without garbage service.  Once the slate was clean, I began the transformation of a hellish space in to a heavenly one.

It took 7 years to renovate the house in a loving and artistic manner and it and the garden are still a work in progress after 12 years.  First of all I took down the fences that had separated me from the mountain of debris and pitbulls for so many years.  I built a connecting stone path between the houses and laid a 3/4 inch round rock patio in order to have a clean space to work outside. The first phase of the garden was a kind of extreme make over so that it would be pleasant to inhabit in the short term.  But my eventual goals were far more involved for this small space.  Being only 18 by 33 feet, I needed to use every square inch of space to pack in a lust for plant collecting and stone.  I wanted to have two levels in the garden to give it depth and raise the height to screen out an unattractive house just 3 feet from the rear property line.  So I built a 2 foot high wall along the back and pebble mosaiced the cap of the wall.  Then, over the following month of May I started what I call the ‘May Wall’.  On May day, or Beltane, I made a small native American Medicine Wheel on the wall cap with stones I had collected from around the West Coast of the U.S, with many stones coming from Southern Oregon.  In the center of the wall is a rectangular indentation where I placed a clawfoot bathtub for taking hot baths in the garden.  I incorporated pieces of carved sandstone I had collected and shipped back from 3 winter trips to the state of Rajasthan in India.  I completed that section of the wall on the last day of May.  The cap of the wall is like a gallery of favorites, many of them inherited from my grandparents, who had a small rock shop and cut and polished stones.

This garden has a strong influence from the 6 winters  I spent in India from 1994-99.  My first exposure to hand carving stone was in South India in the ancient town of Mahabalipuram in Tamil Nadu.  Prototypes for centuries of Hindu temple design originated here, carved in situ from granite outcrops during the reign of the Pallava Kingdom from the 7th to 9th Century.  Granite is a hard, igneous stone and requires great patience to sculpt.  Today, hundreds of craftsmen continue to painstakingly render architectural components and religious imagery in a lineage handed down over 1500 years.  I designed stone bowls during a month long stay that I have kept because they are quite precious and unique, and to me, quite sacred.  They are perfectly round, with no flat base to rest on, but are so precisely balanced that they return to level.  A stylized lotus blossom is carved in the bottom of each one.  The concept is that by attaining perfect balance, one transcends the mirror on the surface of the water that reflects the illusion of reality, so that one can see the lotus, a representation of pure conciousness.

The following 4 winters I traveled part of the time in the Indian state of Rajasthan.  I visited most of the major centers for culture in the state, each having its own defensible walls and palace for the ruling maharaja.  Most buildings in Rajasthan are build of elaborately carved sandstone.  When exploring places like the Amber Fort outside Jaipur I was struck by the romantic beauty of the architecture, in particular in the harem quarters and gardens.  In the city of Jodhpur, I found architectural salvage in piles behind warehouses where furniture is manufactured using recycled wood and metal from old buildings.  Often buried by sandstorms and brush, I excavated some pieces nearly lost to time.  Over the course of 3 winters I shipped selected pieces back to Oregon via Mumbai, Singapore, and Los Angeles, where they were sent by train to Portland.  I built a display garden in an abandoned lot next to a cabinet maker’s shop nearby where I could unpack the crates and have sales.  Many pieces were damaged in transit and my hopes of selling them to clients to incorporate in to their gardens dwindled.

When I bought the house next door I moved all of the pieces in to the basement of that house so that I could focus all of my energy on bringing the dwelling back from ruin.  I completed the May Wall and constructed a high concrete block wall on the east property line.  The garden is essentially a series of simple rectangles.  The seat height wall runs the length of the garden with a planting bed behind it.  Plastic bamboo barrier attached to the rear wall contains a strip of Phyllostachys nigra ‘Boryana’, a lovely form of black bamboo with greenish culms spotted with brown.  Transplanting large clumps from a bamboo farm made for instant gratification.  The bamboo is by far the most labor intensive plant in my garden and its use should never be taken lightly.

At the base of the block wall, connected to the May wall, I built a raised rectangular pool.  This is some of the finest stone work I have ever done.  The pool is lined inside and out with wonderful pieces I collected from beaches on Puget Sound in Washington and elsewhere.  The cap is veined with tumbled tiles and stones from the Rio de la Plata in Buenos Aires.  The pool and May Wall buttress the high wall that I would later cover with Rajasthani stone window arches and panels, creating niches for a collection of bronze Buddhas and Hindu figures I collected from trips to Thailand, Laos, Cambodia, Vietnam and.Myanmar.  The stonework here is incredibly tight, with absolutely no mortar showing.  Stones were carefully selected for their individual beauty and then arranged for a perfect fit.  The look reminds me of the way the stones fit together on the beaches and rivers I collected them on.  I built in a network of flexible copper tubes to attach to pumps for fountain jets that flow in to the pond and from the wall in to a bowl at ground level.


After the pool was finished I started to mock up what I call the Niche Wall.  I’m glad I didn’t sell the carved pieces that I used in the wall because I sincerely doubt that I could ever replace them today, and they really are treasure to work with.  The window frames mostly have a scalloped border that alludes to a flower or lotus blossom form.  Carved floral motifs depict gardens of paradise.  In between and behind the frames are vertical stone mosaics of special stones I spent years gathering, many arranged like fans.  The look reflects the influence of Islamic buildings around the world, from the Mughal palaces and tombs of India, the Topkapi Palace in Istanbul to Persian shrines in Iran, or Koranic schools in Morocco blended with the natural world of the Pacific Northwest where I live.  Each niche has a cut sandstone platform base creating a flat altar in which I create vignettes with special objects and statuary.  At night I light Moroccan lanterns and votive candles for a magical effect.   On special occasions I make marigold garlands to hang around the necks of some of the Buddhas. 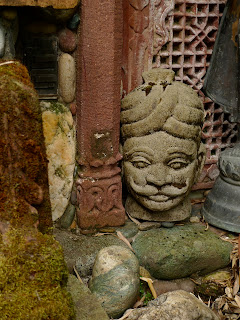 The garden is luxuriant and fabulous to inhabit.  When it is raining the stones become richer in color.  Moss has created tiny gardens where moisture collects like you would see on cliff faces in the wild.  I lay Oriental carpets and piles of pillows on the round gravel patio on dry days for reclining and beholding the beauty of the space, and set up a bed on boards laid over the bathtub.  Raspberries and figs and Asian Pears hang with fruit in the summer.  Jasmine and peppermint scents the air.  Trickling fountains symbolizing divine artesian springs calm the mind.  Birds flit about, hummingbirds sip nectar, and my fancy tailed goldfish drift amongst colored glass floats in the pool.  It truly is heaven on Earth, a place I can grow old and be happy taking hot baths to soothe my aching body after so many years of hard labor.  Champagne Sunday brunches in the garden have become the stuff of legend and often last until evening.

I think that because I am such a vagabond of spirit, I needed to create someplace divine to lure me back home again every year.  And it works.

Posted by Jeffreygardens at 9:07 AM