The Second circuit in the Labyrinth is dedicated to the Planet Venus, and the Goddess of Love, beauty,  pleasure, and procreation.  This is the second shortest circuit in the Labyrinth.  Venus is a terrestrial planet about the same size as earth but has an atmosphere that is 97% Carbon dioxide.  The surface of Venus is 462 degrees centigrade, so there is no water.  The outer layer of the atmosphere is Sulfuric Acid.  Charming.
Venus is the Roman equivalent of the Greek Goddess Aphrodite.  According to Hesiod's Theogeny, a poem describing the birth and genealogy of the Gods, Aphrodite was said to have been born out of the foaming sea (Aphros) where the genitals of the God Uranus were flung after he was castrated and deposed by his son Cronus (Saturn) at the desperate request of his Mother, Gaia, who was tired of giving birth to bizarre and troublesome children.  While this may cause a smirk of malice among women, and men to cross their legs, I find the analogy of love being born out of the pain of divine castration to have some interesting psychological connotations.  What better way to explain the vagaries of love to scholars and illiterate sheep herders about the irrational chaos inspired by the secretion of hormones and various other chemicals in the brain when one comes in to the proximity of an object of desire.


When the genitals hit the water, Aphros and Bythos went to work.  Aphros (Sea foam), and his sibling Bythos (Sea Depths) were Ichthyocentaurs, anthropomorphic sea creatures with the body of man to the torso, where a pair of horses legs emerged followed by the tail of fish.  They were fast swimmers and able to breathe underwater.  They bore a scallop shell to the surface near the shore of Pathos on the island of Cyprus where the genitals had splashed, from which the Goddess Aphrodite emerged, so beautifully depicted in Botticelli's painting and this scene from the Terry Gilliam movie, 'The Baron Von Munchausen.  Aphrodite literally means rising from the Sea Foam.


Double click this to make the video full screen

A less macabre birth story is the claim in Homer's Iliad that Aphrodite was the offspring of the Goddess Dione, a consort of Zeus.  Dione is a feminine form of the word Dio, so essentially she was the female aspect of Zeus himself.

Aphrodite was so beautiful and desirable that Zeus suspected there would be trouble in the kingdom with suitors fighting for her favor, so she was married off to the hideous God Hephaestus (Vulcan), the God of artisans and metal smiths.  He made her fabulous jewelry and a corset that made her even more irresistible, but she was not content with him and took other lovers, including Ares (Mars), the God of war.  Hephaestus learned of the affair from Helios and made a very fine but unbreakable net which he cast over them as they slept naked together.  He dragged them to Mt. Olympus to exact retribution, but the other Gods only found  the situation humorous and made him release them with a minor sentence.

Aphrodite is often depicted in the company of her winged son Eros, the God of Love.  Eros later became the Roman cupid, which is the most pagan of characters to cross over in to the realm of Christianity.  My favorite Eros story was a time when he was kissing Aphrodite and a loose arrow in his quiver grazed her breast.  She pushed him away but then her gaze set sight on the youth Adonis with whom she fell hopelessly in love.  He was a hunter so she followed him on his expeditions, even though she had no interest in hunting.  She was so distracted that she fell behind on her divine duties and had to leave him for a time to tend to her responsibilities as a Goddess.  Before she left she advised Adonis not to hunt animals that showed no fear.  Shortly afterwards he was castrated by a giant boar (believed to be a jealous Ares).  Ouch!  It is said that where Adonis's blood spilled Anemones bloom.  They were my favorite late winter flower when I was in Greece, colonizing specific areas of suitable habitat.  Once again castration leads to beauty.


I began the Venus circuit on Easter Sunday after a lovely sunny day of pebble collecting on the Country Club peninsula of the island with a woman named Deborah Cheadle, who's family's summer home overlooks a geologic formation created when the sea floor was uplifted during a great earthquake that occurred hundreds of years ago.   Later I built the loop from the Earth circuit and made the first hearts in the second circuit dedicated to love.


These are not the most obvious symbols since they are usually made of two stones pressed together at the center.  Love usually attaches itself to another entity making it a two part equation.  The ultimate love is loving compassion for all sentient beings as prescribed in Tibetan Buddhism as a way of liberating the soul.  This is a good circuit to commit to that ideal while walking the Labyrinth.


The next day was gorgeous once again.  The resident woodpeckers to working on trees making a wonderful vibrational sound in the forest.  I set up my forms and worked from green to pink, and red in to purple, ending where the circuit will loop to connect to the first circuit, dedicated to the planet and God Mercury.

A couple who's dog Riley passed away brought me two white pebbles they had found the beach in Fay Bainbridge Park.  They told me that the speckled white granite one was exactly the same color as Riley was.  I'll make a flower around a geode using the two pebbles for petals when I make the loop in the white northerly direction connecting the Venus circuit to the Earth circuit.
Later a man named Chris and his daughter Christine came cycling by.  He said he had been reading my essays and was very interested in the stories about Greek and Roman mythology.  It was one of those engaging conversations that just naturally occur in this space.  It inspires profound thought.  I had just wet the stonework so I could take my daily photograph and the light was perfect.  I was done working for the day but told them I would make them a pair of hearts tomorrow.


It rained all night but was dry in the morning and it turned out to be a pretty nice day in spite of the weather forecast for more rain.  A group of four people came to visit and got the tour, and then I set to work moving the forms for the days work.  Every day I have the nicest interactions with a wide variety of people, many of whom come back again with more people to share what is happening here.


Helen brought her friend Joyce this morning and we had a nice talk about what I am building and how I would incorporate the ceramic heart Helen had left with her note earlier.

They each gave me a silver coin with an angel on it to place in the mortar below the heart for their children.  It was a very sweet gesture.  Angels of Love.


So my goal for the day was to build the Venus circuit from the west to the bend in the north connecting to the Earth circuit.  I transitioned from orange to black to white, and in the bend I set a collection of small stones and shells given to me by a woman named Kayla representing her family and the challenges they've faced and overcome in the last year.  Near those I placed 3 geodes, surrounded by donated ceramic bits and beach glass and the two stones for Reilly the dog.  I added white marble stones I had brought back from sacred places in Greece as well.  One is a disk of white Parian marble that I found on the island of Paros at an excavation site with Hellenistic period mosaic floors.  I had other pieces of marble from the Temple of Hera on Samos, the beach of the Delian Apollo on Naxos, and beaches on Crete.  Another stone came from Pompeii when I was there 5 years ago.

I placed the two angel coins beneath the ceramic heart and filled the center with bits of beach glass.  This cluster of mixed elements makes for an interesting and rich conglomeration.


Then I built the other loop adding 3 more geodes to match the other side.  I placed little ceramic masks made by Jenny Anderson in the gaps in between the two circuits and tucked a tiny starfish that somebody had left for me next to one of them.


From there I worked in to the silver stones that represent the middle of winter and then in to blue green. I places a heart shape rock somebody had left for me that was rather thin, so I pinned it down with green oxidized nails from Blakely Harbor that Chris had given me.  Hopefully they will keep it from popping out of the mortar as the Labyrinth ages. 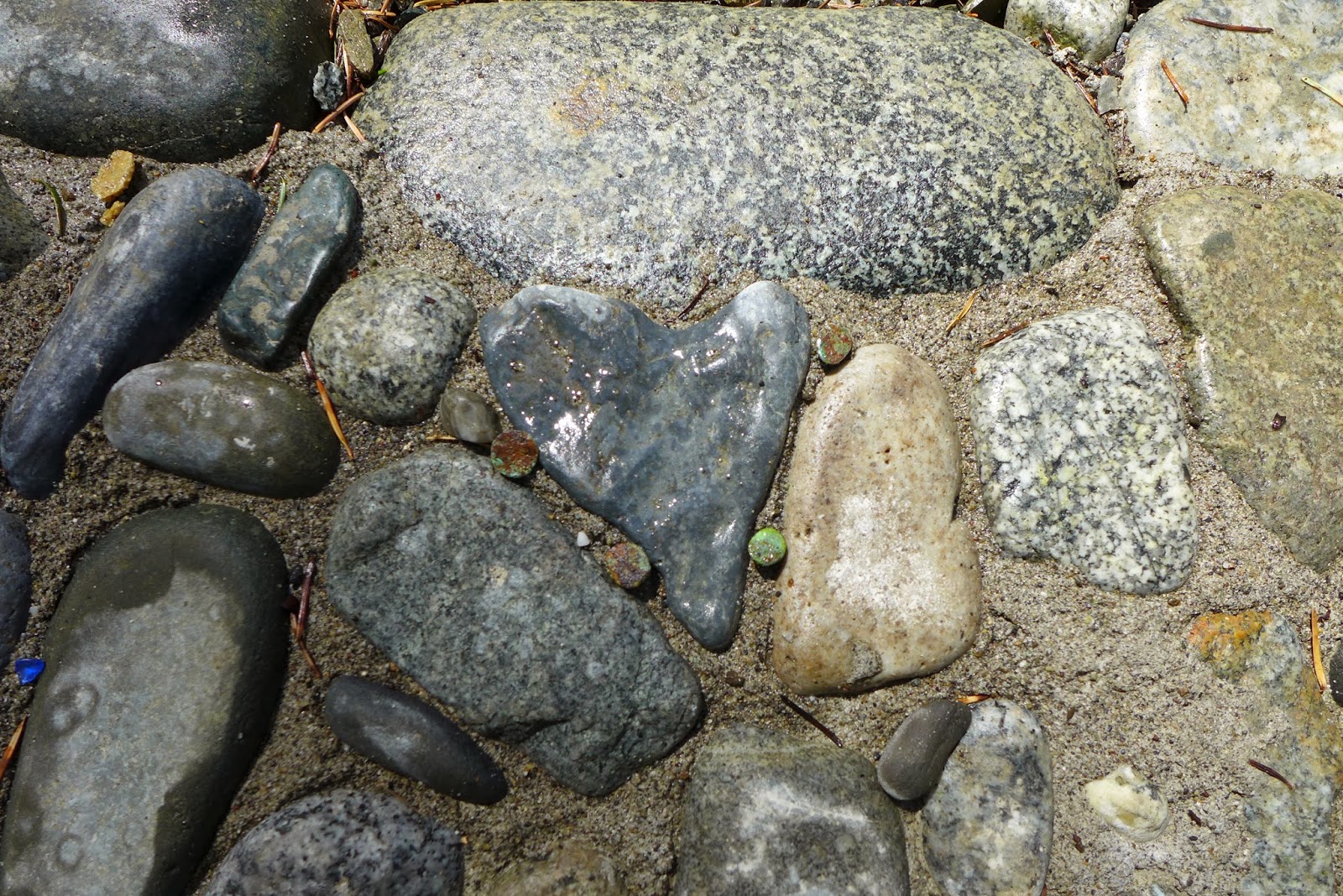 The end of the Venus circuit will loop in to the Mercury circuit which is the last and shortest one.  The open space in the center of the Labyrinth is getting really small now after about 3 months of hard work. When people walk this circuit I hope that it triggers feelings of love and understanding and caring.  And then you turn to Mercury, the messenger and deliver a love letter to all who come in to contact with you.
Almost done!  Thanks for reading this, Jeffrey
Posted by Jeffreygardens at 8:13 AM