The Alcazaba of Malaga

The Alcazaba is a Moorish citadel built on a spur of a hill overlooking the harbor of Malaga on the southern coast of Spain.  The site was formerly a Roman fortress and there is an ancient amphitheater at the base of the walls.  The citadel was built by Muslim rulers starting around the year 1057, at the base of the hill crowned by an 8th Century fortress, the Castillo de Gibralfaro.  There are Alcazaba citadels in other Arab towns in Spain, including Granada, but this is the best preserved.  The Alhambra in Granada is the best known of the Moorish architectural complexes in Spain, as it was the capitol of the Nasrid Dynasties, and is one of the most beautiful palaces in the World.  The Alcazaba in Malaga is very modest by comparison, but in that is where it's charms lie.


You enter the complex through a series of angled gates beneath towers that make the citadel easier to defend.  This also makes for a wonderful series of twists and turns in a relatively small space.  There are narrow walkways on top of the walls to supervise the paths below.  Visitors can explore these paths to get great perspectives of the way the fort is laid out. 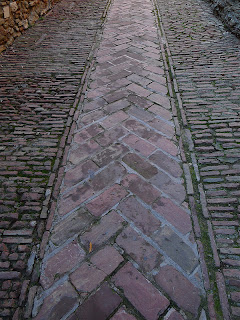 The pavements are varied and elegant blends of stone, brick, and pebble mosaic, with border strips and central panels that change around every corner.  This makes the progression climbing the slope a delight as the designs, while simple, are very beautiful.  How different this is from your average American sidewalk!  It is rare to see such wonderful compositions, one after another, each as beautiful as the last.  As a designer and builder of garden structure I really pay attention to how things are laid out.  In the path on the left, a diagonal chevron pattern creates the center band.  Then there are two lines of vertically laid brick, and then the outside bands of perpendicular bricks, also laid on edge.  This creates a relatively smooth pavement to walk on.  Flanking the path are stone cobbled bands to contrast the orderly brick.  These are slightly raised so that cart wheels would be deterred from straying from the path.  The paving inside the gates is usually a pebble mosaic medallion acting as a point on which to rotate and pass in to the next corridor.

Once you enter the Citadel proper, the element of water appears.  First there is a courtyard divided in to four parts in the form of a classic Chahar Bagh.  This is derived from the Persian prototype where the paths symbolize the four Rivers of Paradise, flowing with water, milk, honey, and wine.  This patio is called the Plaza de Armas.  The four planting beds are bordered by clipped hedges, with a central marble fountain.  Water channels, called rills, come from small openings in the terrace walls that in this case flow through a tiny tunnel under 3 of the four brick columns that center on the four paths.  These columns support a trellis planted with Jasmine to bathe the garden in heavenly fragrance.   Water rills are derived from irrigation channels used to flood beds or water trees in orchards.  In their ornamental capacity they still act as canals to bring water in to garden area for irrigation.

Another set of steps climbs against the wall to the next terrace, where you again turn in to a larger patio terrace with another central fountain on a pedestal with four spouts dribbling in to the basin below.  Italian Cypresses frame the space and a flock of green parrots likes to hang out there eating the cones.  Beds of blood red roses splash color in front of the rough walls made of a mixture of brick and stone.  There is a well with a star pattern pebble mosaic adjacent to this patio, called the Patio de los Surtidores (Jets of Water), which lies below the next terrace.  This is the beginning of the palace, where rooms surround classic Andalusian courtyards.

The first set of palace rooms is in the Torre de la Armadura and Torre de Maldonado.  Beautiful keyhole and double arched doors with carved stucco remnants lead to modestly sized rooms and a terrace with spectacular views of the Mediterranean Sea.  Again the spaces are intimate in scale when compared to the Alhambra in Granada.  Much restoration has been done so the tile work and detail is surely different from the original palaces, which were probably much more sumptuous, but the simplicity of the details works quite well in the scale of things.

After passing through interior rooms you come to the Patio de los Naranjos, the Patio of the Oranges, where there are round marble basins and rills spilling in to two deeper pools at each end.  A row of four orange trees are planted in recessed squares connected by rills for irrigation.   Handsome arches frame the view from each end, providing a shady place to contemplate the space on hot or rainy days.

The adjacent patio is of similar scale.  It is called the Patio de la Alberca, and is similar but much smaller than the famed Court of the Myrtles in the Alhambra.  It has a simple rectangular pool framed on both sides by clipped rectangular hedges.  The pool reflects the central arch and cools the space on hot summer days.  A matching pair of marble basins are connected by rills at each end of the pool, bringing the water element in to the forecourt of the interior spaces.  It is a wonderful detail of Moorish palaces that is so simple and elegant and captivating as the water ripples from a simple spout of water at the center.  The sound of the water trickling is everywhere throughout the garden, yet it is used in such a restrained way as to not be wasteful in this dry environment.  It is a far cry from our American swimming pools and out of scale 'water features' as we have relegated them.  There is much to be learned from the Arab model.

The Alcazaba is very close to the hotel I am staying in and I have revisited it again a couple of times because I loved the experience so much.  It is an ideal place to meditate and is not inundated with tourists in the winter time, when the light is golden and the day time temperatures quite pleasant, at least in December.  If you find yourself here, dedicate some time to indulging yourself to hanging out in these wonderful gardens.

Posted by Jeffreygardens at 2:17 AM