I just spent 3 days, from December 17 to the 20th in the town of Tarragona, southwest of Barcelona, an hour and a half by train.  I was drawn to this municipality because of it's long history and the layered remains that have made the city what it is today.  Phoenicians first settled here possibly 5,000 years ago, perhaps on previous habitations, and built stone structures and fortifications.  The Romans later built Tarraco, as it was called, the capitol of their Iberian conquests which covered most of present day Spain.  They built a magnificent city with a forum, Circus for chariot racing, an amphitheater for blood sports, and temples to the Roman Gods.  The city was partially abandoned when the Muslims arrived, but became an important Christian center in the 11th century.
Old Tarragona sits on a hill above the Mediterranean.  The Roman amphitheater is near the city's beach.  Above that are remains of the Circus, with a curve in the racing track on he sea end and remnants of walls excavated from under city streets.  Towering above it is a tall building of Gothic origin using stone pilfered from Roman structures.  This became a notorious prison used as late the Franco's fascist regime, where hundreds of people were sentenced to be executed after the Spanish Civil War. 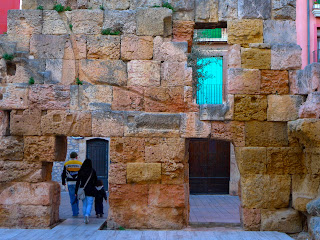 When you walk around old Tarragona, you see old stone walls appearing around every corner.  Long medieval blocks have massive stone foundations that could be thousands of years old.  Sometimes these take on an almost Flintstone cartoon quality because of their sheer size and rough forms.  Free standing ruins sit in plazas that have been used as gathering places for millennium.  The town's administrative square sits on top of the old chariot race track, with vaulted walls built over by adjacent buildings that can be seen inside restaurants and shops.
The magnificent Cathedral, the largest in Catalonia, was built between the 12th and 14th Centuries on the site of an important Roman temple and a later mosque.   It is a blend of Romanesque and Gothic styles, with Moorish elements and later Renaissance additions.  There are perhaps 3,000 years of quarried material in the building of the Cathedral and surrounding buildings.  The deeper you go in to the ground the farther back you go.  Old buildings were filled over and built on top of so that ancient foundations can be as much as 3 stories underground!

Pilfered materials were used to build new structures, creating historic collages of various types of stone.  Some of the softer stones have eroded to add a natural organic element to the character of the walls.

When river stones are used in the streets they are usually larger in size and are set deeper in to the mortar so that they wont pop loose under the weight of car tires.  Bands of cut stone break up the areas so that the river stone mosaics are framed in squares and rectangles.  A curving street going up the hill paved in this method is truly a beautiful thing.  Steps are artfully incorporated in to the adjacent sidewalks with perfect proportions.
It is clear that space is a precious urban commodity in Spanish towns, and they are given the finest quality treatments.  Experiencing them is a real treat, especially when coming from the United States, where the crappiest and least attractive materials, white concrete and asphalt, are used with abandon.  We have much to learn from Europe.  Just a reminder that I can build such things, so if you ever decide to invest in lasting and beautiful stonework for you garden, my years as a hard laborer are numbered, but I am interested in manifesting great things while I'm still capable.

Thanks for reading, Jeffrey
Posted by Jeffreygardens at 5:55 PM