The Botanic Garden of the University of Valencia 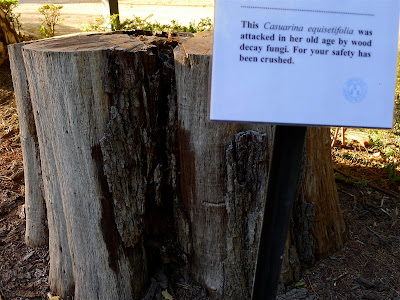 A Casurina stump had a badly translated elegy by its stump, but they are kind of ugly trees and certainly not rare, so if you had to lose one…


There is a wonderful iron shade house that was restored after a fire in 1990.  It shows that you can still build things like this.  It was originally made of cast zinc.  My favorite thing inside was a small ball of Tilandsias hanging on a long wire over the central fountain.  The hot houses, that are a big draw for me in botanical gardens were not all that exciting.  They are old but not particularly elegant, being a half arc in front of a heat absorbing wall and were full of overgrown specimens that no longer fit gracefully in the spaces.  One has the usual collection of orchids and another has bromeliads, but these were not open to visitors.
The most sculptural and interesting part of the garden is the Cactus and Euphorbia Succulent area.  Aeoniums are native to the Mediterranean and grow in to beautiful specimens here.  Cactus grow in the western hemisphere, while their biological cousins the Euphorbias fill th dry environmental niche in the eastern hemisphere.

Agaves and Aloes and Yuccas add a spiky contrast to the linear and platy shapes of the cacti and candalabra forms of tall Euphorbias.  A large Euphorbia candelabrum in the garden has wonderful wavy ridges in the bark of the trunk that look like serpents climbing the plant.

A beautiful specimen of Yucca brevifolia shows how stately this plant can become with age, developing an elephant foot like trunk.

Posted by Jeffreygardens at 12:15 PM